The Jackadgery Gold Project is located east of Glen Innes in northern New South Wales within the New England Orogen.

The project has never been drilled and contains ‘walk-up and fully permitted’ drill targets.

TechGen has also been assigned an option to acquire a 90% interest of EL 8389 and acquired a 100% interest in EL 9121 from Zenith Minerals Limited’s (ASX: ZNC) subsidiary, Black Dragon, at a time when ZNC has shifted its primary exploration focus from gold and base metals to lithium and battery metals. 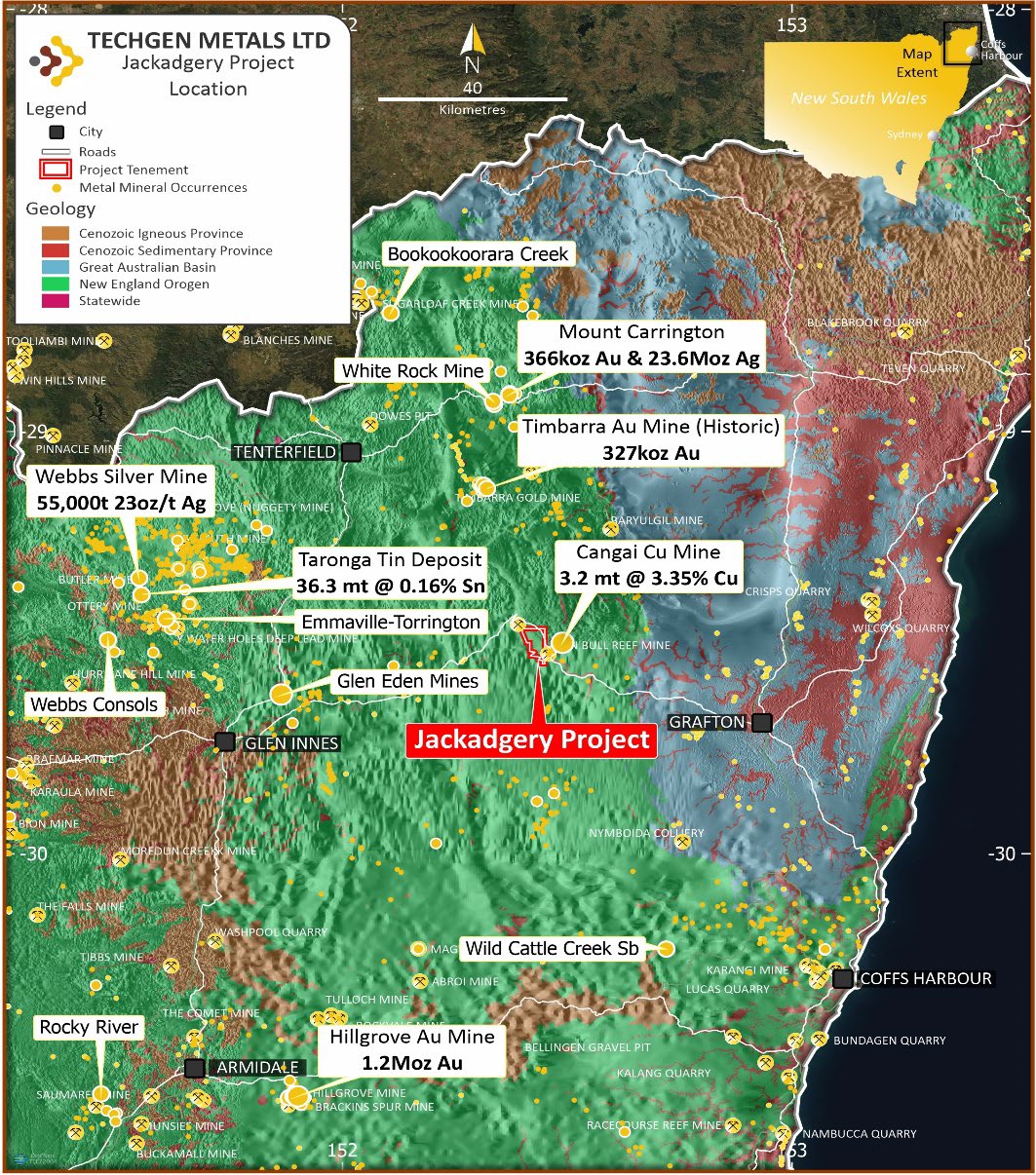 Data from a dipole-dipole induced polarisation (DDIP) geophysical survey completed by the Jackadgery Project holders in 2017 has been processed and evaluated by Fender Geophysics (a 10% retained partner in EL 8389). Three, 1.5km long east – west lines were surveyed at northings 6733200mN, 6733400mN and 6733550mN. The northern line, line 6733550mN, is parallel to the mineralised trench dug by Kennecott Exploration (Australia) in 1983. 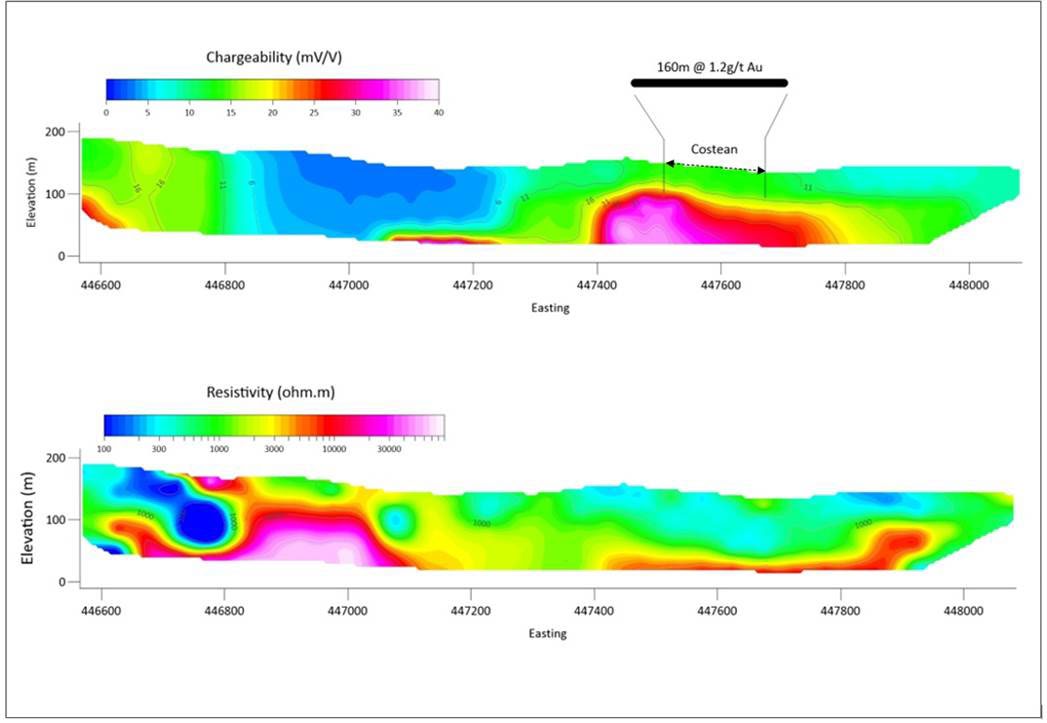 The cross-section view of the northern DDIP line is presented as Figure 2 with the mineralised 160m @ 1.2g/t Au zone in previous trenching (costean) also shown. A distinct chargeability high occurs beneath the trench area with readings up to 40mV/V. The chargeability high may indicate the presence of disseminated sulphides beneath the trench. The New England Orogen forms the eastern margin of the Australian continent and extends for over 1,700km from central NSW through to northern QLD. The rock units that form the New England Orogen range in age from Neoproterozoic through to Mesozoic.

Numerous mineral deposit styles are known within the New England Orogen including deposits of the Intrusion Related Gold System (IRGS) style. In IRGS style deposits the gold mineralisation is sourced from an intrusion and gold mineralisation can occur either in the intrusive body or in the country rocks which are intruded. Gold can occur in veins, breccia zones or disseminated within the intrusion or as a combination of the three.

Historic gold workings at the Jackadgery Project consist of several shallow shafts sunk in the 1870’s and two later, large areas of surface gold sluicing (Figure 3). Creeks below the colluvial workings have also been worked for alluvial gold. These historic gold workings occur in a sequence of Carboniferous-Permian greywacke and siltstone intruded by small intermediate sub-volcanic trachyte to micro-monzonite of likely 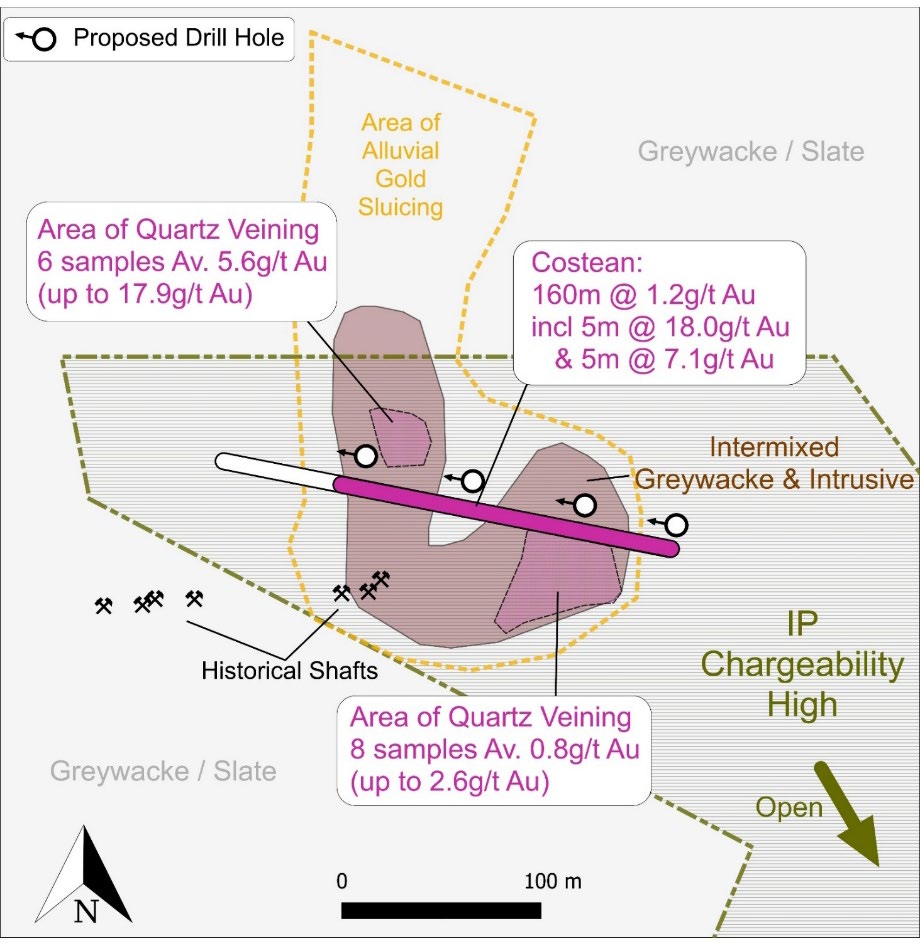 The last significant exploration activity was carried out between 1983 to 1985 by Kennecott Exploration (Australia) and Southern Goldfields Ltd. Activity included a 220m long backhoe dug trench into weathered quartz veined bedrock across the main (northern) area of alluvial gold sluicing. The trench averaged 1.2 g/t Au across the interval 0 - 160m (with 5m composite assay intervals ranging up to 18.0 g/t and 7.1 g/t Au; (refer to ASX announcement 16th May 2022).

Several features of the geology and mineralisation at the Jackadgery Project, including the presence of intermediate sub-volcanic trachyte to micro-monzonite bodies and sheeted and stockwork quartz veins with associated sulphides support the Company’s interpretation of a possible Intrusion Related Gold System model for gold mineralisation at Jackadgery. In addition, IRGS gold deposits are known in the Jackadgery area with the previously mined Timbarra Gold Mine (Identified Mineral Resource now mined of 417,000 oz Au), located 40km north of Jackadgery.

Figure 4 represents a schematic cross section showing, on the left side, the Intrusion Related Gold System Model and how gold mineralisation can occur in relation to an intrusive body. The right-hand side of Figure 4 shows the interpreted position of the Jackadgery Project within the IRGS model. 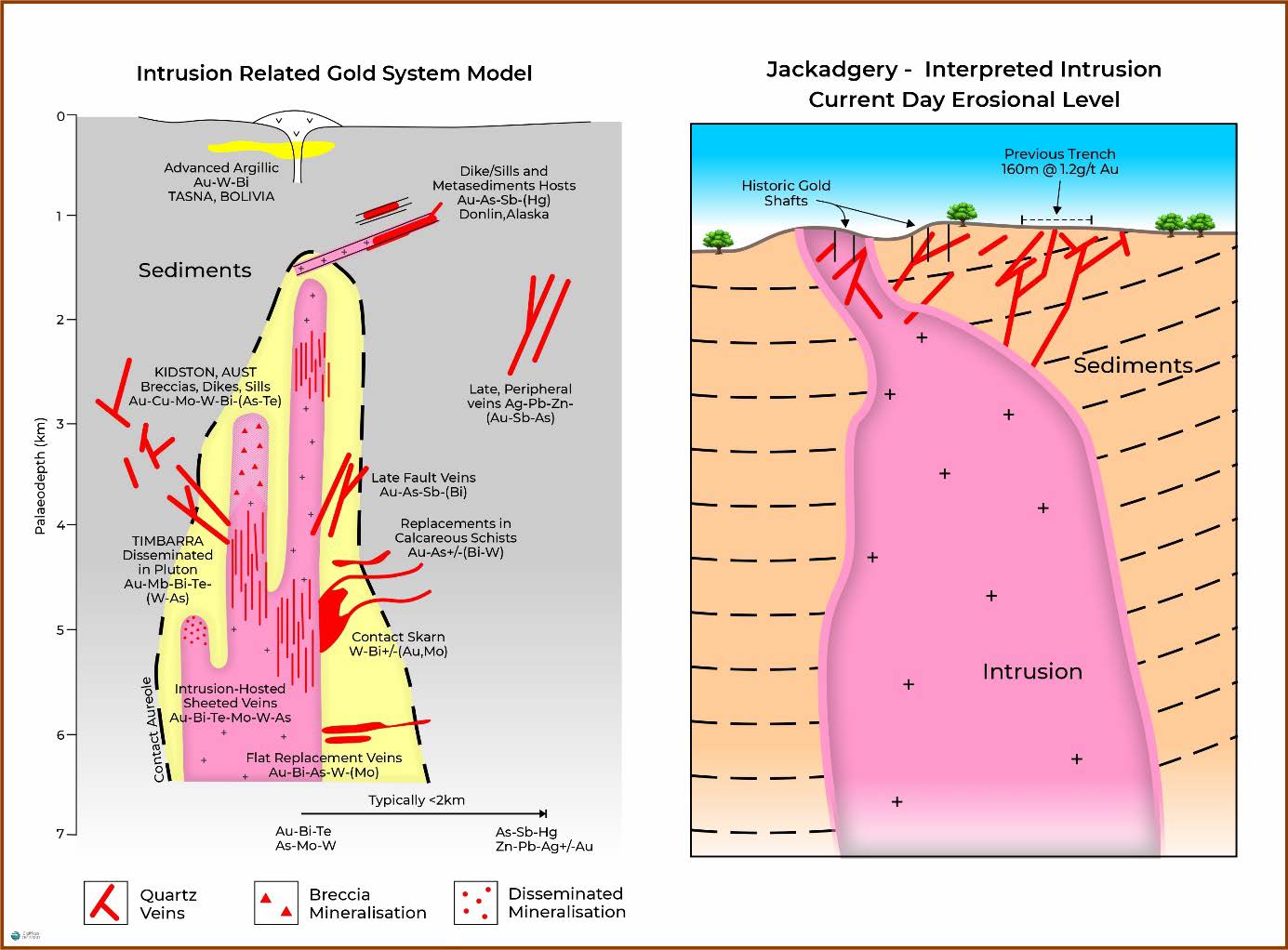 An existing drill permit and access agreement allows for an initial fence of drill holes to effectively test beneath the wide zone of near surface gold mineralisation outlined by the historic trench (160m @ 1.2g/t Au) and the surface rock chip channel samples (Figure 4). The inaugural drilling program is anticipated to commence in mid-2022 and will be the first drilling program to be undertaken in the project area.